Last Thursday, Martha turned two years old and we threw her a party in our apartment.

More photos of this will follow in a separate post (as I am now in India for a week) but suffice to say, as is the form on such occasions, whilst the kids had a blast and generally partied hard, the adults stepped up too, and ensured our “Come from 3:30pm to 5:30pm” invitation instructions were completely ignored!

When I awoke in the girls’ bedroom at midnight, having passed out reading them a bedtime story, and I walked around the wasteland of the apartment, complete with sticky floors and toys strewn EVERYWHERE, I knew that I had a long day ahead of me.  By 8am, the place was ship-shape again, my bags were packed for this trip, and I was headed to the airport, via the school and a coffee shop.

After a day in Bangkok yesterday, amongst the familiar districts of Asoke and Phaya Thai, I am now in Chennai, the capital city of the South East state of Tamil Nadu.  A place famous for its masala dosas and idlis – both of which I enjoyed this morning for breakfast.

I was last in Tamil Nadu eighteen months ago and, as always when I come to India, the intoxication of life around you leaves one compelled to capture some moments.

I recall a previous trip to Delhi during which, over a three day period, we witnessed an earthquake, a terrorist bomb, and flash-flooding which immobilised the city’s transport system for twelve hours solid.  Upon arrival here last night, I read about the high profile ambush and murder of Chhattisgarh Congress chief Nandkumar Patel, his son, and local leader Mahendra Karma by suspected Maoist rebels.  In total, twenty four people were killed in the attack.

The political, social and environmental forces at play across this vast nation are unique. Shaping, destroying, enlightening.  All at once.

However, towards the end of May in India, most of anything that you do here is dictated by the temperatures.  Whilst Saigon and Bangkok are heating up these days, with the mercury pushing the late 30’s, in this part of India (as well as in Delhi where I will be later in the week) it’s pushing the mid 40’s.  It is unescapably hot.  It envelopes you from the moment you step out of the air-conditioning of your hotel, and it wraps itself around you and makes you intake sharply.  As I walked down the street earlier, the tarmac floor intensified the heat as I went, burning up through my flip-flops and igniting my toes like popcorn in a pan.

The view down the particular street (above) next to Green Park Hotel where I am again staying, is much the same as I remember it to be.  A hot-potch of shacks and shops and stalls and street vendors, all seeking shade from the sun and a few rupees from the critical sales they rely on day in and day out.

What is different is the well sized new shopping Mall right next door to my hotel – the Forum Vijay Mall – built from scratch in the time since I was last here, and from where I am now seeking refuge from the sauna like conditions outside.

This is a snapshot of 21st Century India, in one panoramic sweep of the camera: taking in the assortment of vendors on the streets outside and, inside the Mall, the middle-class citizens of Chennai, buying their Levi’s jeans and their Gucci handbags, and then visiting the iMax cinema to complete the weekend’s recreation.

In Bangkok, there are so many shopping Malls in parts of the city that you can walk four or five blocks under their coolly conditioned interiors, and escape the traffic jam noises and pollution outside.  What you can also do in Bangkok is traverse the city using the local network of canals, with motorised barge taxis, unknown to the average tourist but equally, if not more so, a great way to escape the car horns.

Chennai will no doubt have more shopping Malls, too, by the time of my next visit.

The question of whether these Malls will remain for the exclusive use of the city’s “well off”, leaving the smouldering pavements outside for those who have nowhere to live, and very little to live for, is a whole different conundrum. 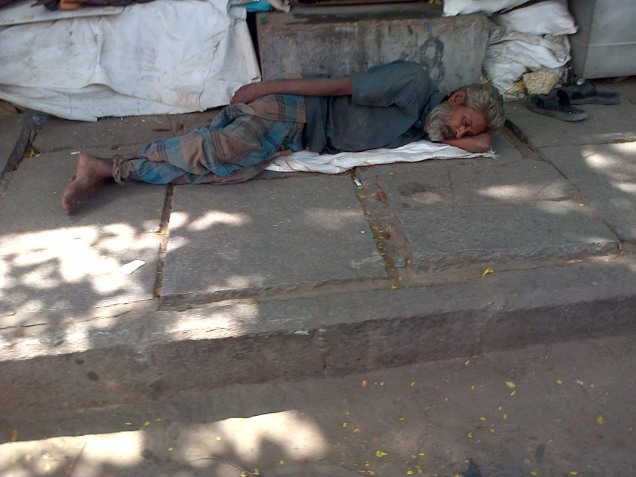