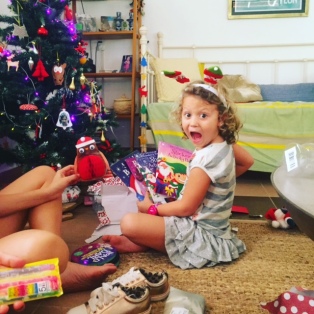 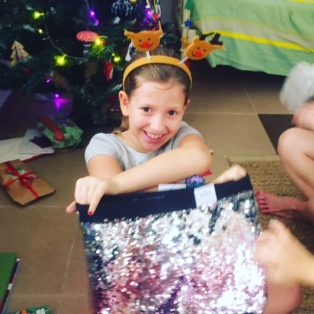 Melbourne
After Christmas Day we flew to Melbourne, and we slept on the plane on our way there. We then met Phoebe at the airport. She drove us to Pobby and Mike’s house (but Phoebe also lives in the house). So does Aggie their dog. Pobby had made an egg and bacon pie, mainly for Daddy. My sister Martha got lots of tattoos from Phoebe.

The next day we went to town mainly to go shopping to Smiggle for me and Martha. The adults went to other shops for some other stuff.

After that day we went swimming with Phoebe and my sister and my Dad in a 50 metre pool. I swam laps.

Raymond Island
The next day we went to Raymond island for New Year’s Eve. We were seeing lots of people there and we slept in a tent.

After that day we went to the supermarket then we swam in the lake and Bess took me for my first ever sailing lesson. We then played a big game of boules and my Daddy and Max won. That night we watched fireworks and all the kids stayed awake until after midnight.

The next day was New Year’s Day and we went for a koala walk and I saw 19 koalas.

Then we drove to Mark’s house….

Sorrento
At Mark’s house we had 4 sleeps. We went there with Lulu, Sunny, Hazy and Ella, and also with Max and Quimby, Sam and Matisse and Henry.

The next day was Tuesday and none of the girls had Nippers so we practiced for a show. We did Wizard of Oz. On Wednesday we saw Ella and Sunny at Nippers then we swam in the sea with them and Lulu joined us. That day we performed the show to the adults and I was both the Wicked Witches and I had to melt at the end. 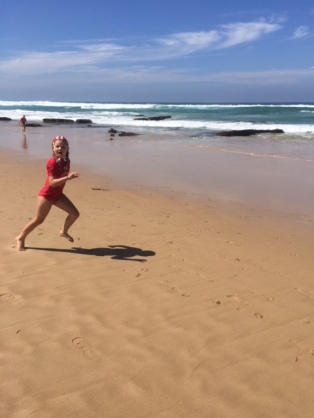 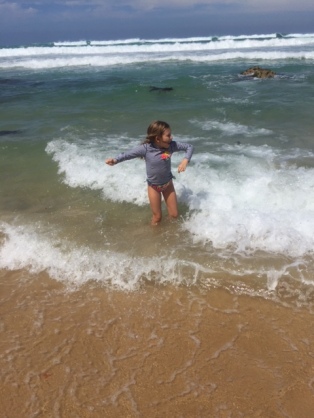 At Mark’s we also did the following things – went to see a field full of kangaroos, me and Martha walked to the Lookout with Mark, we went to Mubbles ice cream shop, we played Rolling Sky and Piano Tiles, and we went to see Lulu, Chloe, Holly, Kiralee and Andrew because they also live there. Every night we went to bed late because it was light until very late.

The very next day we went back to Pobby’s house in Melbourne.

Melbourne (again).
When we got back to Melbourne we did some relaxing with Pobby and Mike and I read Harry Potter and we also watched it on TV. And we watched Nanny McPhee.

We wanted to also go outside and so we went to the zoo with our friends Jasmine and Aleisha. I liked the elephants the best. Their Mum bought everyone slushies. Martha played lots more with Aggie and made her sit and shake hands.

On our last day in Melboure Daddy, Issy, Martha and me went to the Museum and saw real skeleton bones and animals and insects. We also went for fish and chips as it is my Daddy’s favourite food and we bought some yellow peach ice cream. And we had a swing ball tournament with everyone. I came third and Ella came first and Issy came second. In the evening Pobby made chicken pies and pavlova and we also had calipos.

On the Sunday we gave Issy her birthday presents and went to the airport. Pobby bought us more presents at the airport. We didn’t sleep on this plane but watched lots of movies and I read my kindle.

In the taxi home we all drank our drinks.

I had a brilliant holiday. This is one of the pictures I took that Daddy said is very professional…

Monday. And, so far today, I’ve flown to Singapore and just put in six hours working out of a business lounge and still have another eight to go before I get to kip (am Colombo bound this evening for the week…)

Mustn’t grumble however as, since my last post about our summer holidaying in Europe, Issy and I have also just indulged in a trip over to Melbourne earlier this month for weddings, family birthday partying and some brief flirting with a delicious vineyard and the salty ocean road inhalations on offer down in Sorrento.

As is the form when I get back over to the UK, trips like these are extremely special and also meticulously executed, in order to maximise each and every hour with all the important things in life.  In the case of this particular trip, the important things consisted of: new babies; zany nieces; legendary siblings; old school friends; and then an inevitable immersion in all of the particular shopping experiences and drinking haunts yet to reach the humid back-streets of Saigon.

We fitted it all in, and lapped it up (although, truth be told, for me to be accepted into the funky suburb of Fitzoy I’ll need to grow an exceptionally impressive beard – and this may take me a while.)

Video compilations with be forthcoming however, in the meantime, heartfelt thanks to Mark for the most spectacular day at Yabby Lake, to Phoebe for all the snippets of special laughs and larks, to Pobby for the Aga coffee and the egg and bacon pie on arrival (plus about two dozen other mouth-watering dishes enjoyed throughout the week) and to Mike for a lesson in cryptic cross-wording that I will never forget (I hope the Tuesday Latin tutorials continue to go well).

And to Alice and Richard Cook-Watkins. For seating me opposite the bride (I have been dining out on that since) and for laying on a seamless day of memories for us all.

So, as Mike would recommend – to anyone curious enough to ask – it is with whisky that one should finish one’s day and so, in spite of the fact that I am long off being asleep, I may just – on this one occasion – take him up on that and bid you farewell, for now…

Dance floor flashbacks #wedding #orangepants #MarthaMoo #srilanka
All you need is love 💛💚💙 #weddingday #sunhouse #galle #03.01.20
Hello again Saigon arrivals! We made it back in one piece, what now? #wedding #holidays #family #srilanka 🧡

Striving for perfection and new norms

Focus, collaboration and proof of concept: notes from a Singapore Round Table

Economic Resilience: Lessons from a workshop in Kenya

Can we really take big business seriously when it comes to the SDGs?